The Muse: Part of an Austrian crystal chandelier. I went to an estate sale of an 84 year old woman that had passed away. Her daughter told me that she and her husband were at her mother’s house trying to convince her to evacuate. She refused to leave the house as Katrina was approaching the coast. He husband asked the daughter to leave the room while he talked to her Mother. She said about 10 minutes later her Mother comes out with a clean slip, ready to leave the house. That was all she was willing to take, certain that her house would be safe. It wasn’t – the flooding water completely covered her house – a house that housed 40 years of memories of travel around the world with her husband. Her Mother moved in with her daughter and son-in-law. They built a large building in back of their existing house to store the remnants of her Mother?s memories, silt and all. 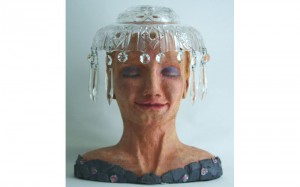