The firm I worked for deployed me to the Mississippi Gulf Coast a year after Hurricane Katrina struck. I worked there for three years – coming home permanently to Atlanta one year ago this February. I thought I understood the devastation until I got there. The media didn’t begin to portray the courage, hopefulness and kindness of the Gulf Coast residents. I’m richer for having worked there.

Below are 7 mixed media collages I made while on deployment. All contain pictures I took (with the exception of the eye of the storm) printed in sepia or black and white, and treasures I found on walks. The frames are 8 x 8 wood – purchased unfinished. They were painted a coffee brown and black and highlighted with color by wrapping a roller with string, rolling it in turquoise paint and then rolling it over the brown/black paint.

No 1: The eye of the storm. Treasure – tile from a destroyed bank. 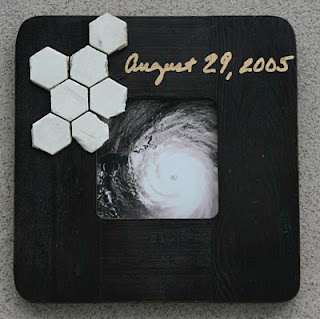 No 2: Tub. This tub was all that was left standing on a slab that a house once stood on. Treasures: old screen door hinge and blue glass drop. 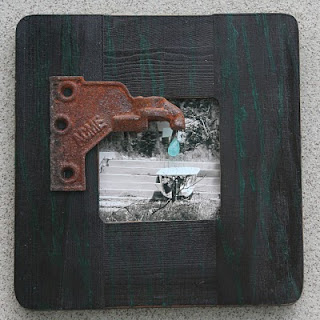 No 3: Sailboat and Mermaid. The picture shows a sailboat in Waveland sunk and laying on its side – two years after the storm. Treasure: metal mermaid with attached pearl chain. 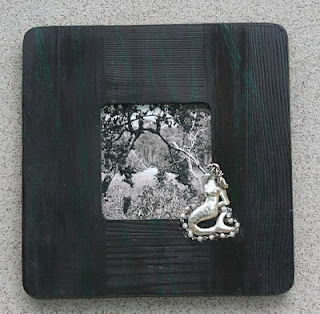 No 4: Crab. I found the body of a crab and barnacles on one of the first walks I took on Gulfport’s coast. I drew the legs and copied them over lace. 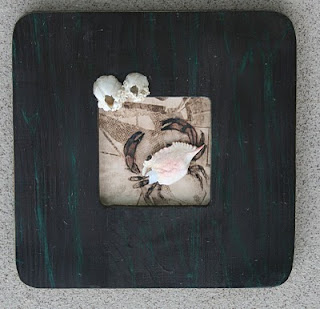 No 5: Carpet. This was so strange to see – I’ll never forget this. The only things left of a house in Bay St. Louis were the concrete pilings and the carpet hanging down that used to be attached to the floor above. Treasures – bits of found tiles & glass. 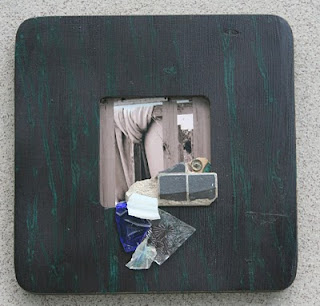 No 6: What was old is new again. A picture on the opening day of the new Bay St. Louis Bridge between Waveland and Bay St. Louis. Treasures – oyster shells. 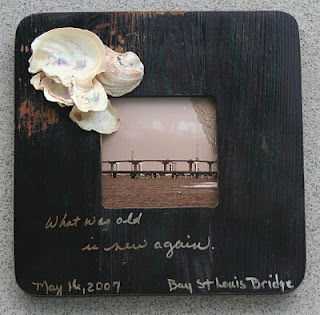 No 7: Church. Perseverance and determination – gotta love the human race. The front and middle of the church are GONE. In it’s place is a large hand painted sign directing everyone to walk next door. Treasure: door hinge. 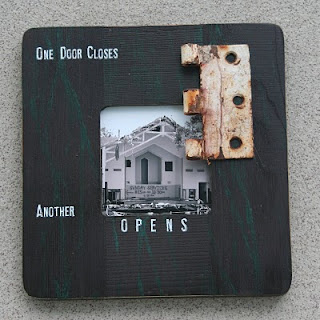