We’ve moved my web site and blog to WordPress.  While still in the process of updating categories and tags, etc., I realized I hadn’t posted one of my favorite boxes (or if I did I can’t find it 😉

I bought a few lawyers reference books from the yearly local library book sale.  This one I took out the text and made into a clamshell box with two trays. 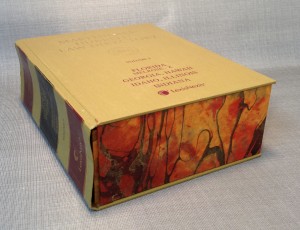 *  The second tray’s design was determined by the clock affixed to the first tray as a handle.  Two trays with a curved portion of one side to surround the clock handle of the first tray.

*  The first tray rests on one board’s thickness covered with the cover paper and glued to the inside of the box.  The second tray’s rests on the first tray.

*  Black Lotka paper was used for the insides of the trays because it’s a strong black, malleable and a good contrast to the warm colors in the cover paper.

*  All of the box and trays are made from book board (it’s rather easy to get a curve in the book board, as around the clock in the top tray). 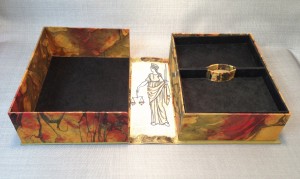 Box Open with both trays in place 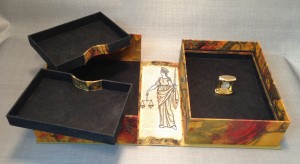 Box Open – shows where the top trays separate to surround bottom tray’s handle when in place. 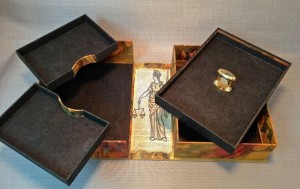 Box – Open – both trays out