My sister Jean had been complaining that the “Borrower” had taken her glasses. The day before – he had taken her keys. They were there one minute and gone the next.

I don?t remember much about making this doll except that it’s stuffed extremely hard and I was crazy about him as he grew.

He’s about 10″ tall,
His arms, elbows, legs and knees are jointed – his fingers have a wire armature for posing.
His eyes are plastic, his hair is wool roving.
His coat and pants were made of scraps I had around the room.
His shoes are made from scraps of leather and have copper fairies glued to the top.
His watch has scrambled numbers and says “who cares”. It was made out of shrink plastic.
The face and body were highlighted with colored pencils. 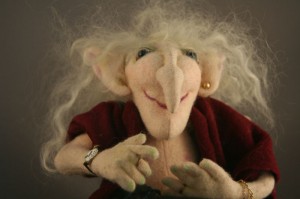