It’s been over a month since my last post! 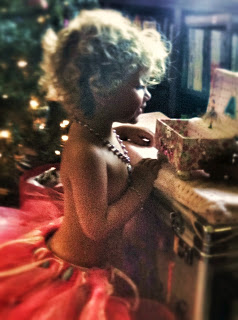 First and foremost…Is this the cutest picture you’ve ever seen?

Gabi opened her dress-up trunk Christmas morning (when this picture was taken).  Stripped down to only the tutu, fairy necklace, magic wand and crown, and holding her new Dora Doll – she twirled on one foot until we were dizzy.  This is her watching her music box ballerina dance.

A couple of weeks after Christmas my son sent us a picture…  Gabi, in her PJ’s, had been sent up to bed to sleep.  15 minutes later my Son went to check on her.  The picture was Gabi standing in the middle of her room with only her Tutu on and a stethoscope up to her ears – checking out her new stuffed dog’s heartbeat.

The time to pull all the pieces of her dress-up trunk together (see previous posts) was worth twice that.  What a hoot!

OK fine – I’ll get to the “excuse”.  I spent the week after Christmas in Melbourne, Fl. with my sister Jean helping her de-clutter her garage (we had a TON of fun) and visiting my Dad who was in the hospital (moving soon to rehab).  I drove home to Atlanta and was home almost a week when I got the call that my Dad was transferred from rehab back to the hospital.  I flew back to Melbourne, Fl – he passed away a week later, he was 84.  My sisters and I spent the week following his death planning his memorial and helping our Stepmother get my Dad’s affairs and her affairs in order (he was a disabled Vet).

The 5+ good reasons?  In between the above…sculpting class started, I discovered “beaded beads” (and taught them to my nieces and nephews while I was in Melbourne), put all the fallout of my Christmas projects away (I was up to my elbows in tulle) AND I made projects for Bonnie Art Tools’ display at the recent Stamp Festival in Gwinnett.  What a blast!  I don’t want to inundate you with a mile long post so I’m only including the Flower Press project here. 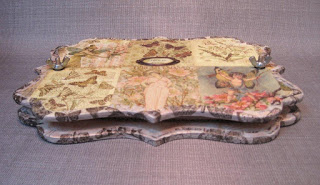 1.  Using the Japanese Screw Punch, I drilled two holes for the screws in one of the pieces of chipboard and used it as a template for drilling the remaining three pieces.
2.  After aligning the holes in two pieces of chipboard they were glued together using PVA glue.
3.  The sheets of decorative paper were glued down on to the chipboard also using PVA glue – one side at a time.  The paper was cut around the chipboard with an xacto knife before continuing on to the opposite side.
4.  The long eyelets were inserted in the holes but weren’t long enough to wrap around the inside of the doubled chipboard so they were glued in.
5.  I wrapped paper tape around the edges of the decorated boards, clipping both sides of the tape and pressing it down as I went along.
6.  The identity plate was positioned where I wanted it – two holes were drilled to insert eyelets to hold the plate in place.
7.  To finish the flower press I cut and alternated 2 sheets of water color paper between sheets of cardboard for pressing the flower and put them inside the covers.